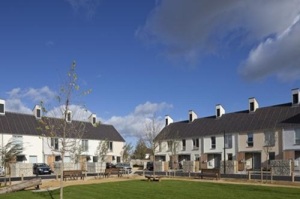 The move is part of a huge shake-up of housing regulations, including ‘optional’ Parker Morris-style space standards for new homes, which the government wants to implement before the end of the present parliament in 2015.

It is understood the streamlined draft regulations and technical standards will be published in the summer, with the regulations and supporting documents coming into force later this year.

The abolition of the energy standard for homes comes in response to the Housing Standards Review consultation and forms part of the government’s wider mission to slash housing regulations by 90 per cent.

It is claimed many of the policies contained within the Code for Sustainable Homes are already duplicated by other regulatory regimes or the National Planning Policy Framework (NPPF).

The demise of the code has provoked a mixed reception from the profession, with many claiming it will lead to a drop in standards and, perversely, result in a more complicated system.

Tom Dollard, head of sustainability at Pollard Thomas Edwards, mourned the loss. He said: ‘[The code] is a relatively simple and effective framework for sustainable housing, which has been successful at improving the baseline for housing in the UK.

‘There are many elements, such as health, wellbeing and ecology, which will be lost with the new Building Regulations-only approach, and in many ways this new “simplified” approach is more complicated for developers and planning authorities.’

Sofie Pelsmakers, an architect and doctoral researcher at the University College London Energy Institute, agreed: ‘If ministers are using consolidation as an excuse to lower standards and ambitions, particularly related to fabric energy efficiency standards and other sustainability targets, such as ecology, water use and waste minimisation, then this government will leave a dire legacy.’

Fionn Stevenson, head of Sheffield School of Architecture added: ‘The government, in its haste to “simplify” everything, [could] throw the ecological baby out with the “red-tape” bathwater.

‘It is unclear how many of the other useful sustainable design requirements in the Code for Sustainable Homes will be dropped in the rush for “zero carbon”.’

However, the government maintains that more than 60 per cent of respondents to its consultation wanted sustainability to be taken under the wing of building control.

Greg Lomas, director of Foster Lomas, said: ‘[The Code] has made sustainable development an aspirational target for clients and forced the construction industry to improve performance of their end-product, within a challenging but wholly achievable timescale.

He continued: ‘Compliance is very much a technical issue and it makes total sense to get building control to oversee its application.’

Tom Hart, director at RG+P, agreed. He said: ‘Anything that can be done to reduce the amount of regulation and red tape to building much-needed homes is welcome and the idea of embedding the more valuable Code aspects, such as reducing water consumption and energy usage, in the Building Regulations seems a sensible way forward.’

Despite scrapping the Code, the government has opted to keep a watered-down version of the Merton Rule – a key planning rule introduced in 2008 that enables local councils to set targets above Building Regulations for renewable energy in new homes.

Mike Landy, head of on-site renewables at the Renewable Energy Association, commented: ‘This popular policy will continue to enable local authorities to ensure that new homes in their locality enjoy lower energy bills and carbon footprints, thanks to on-site renewables and renewable heat networks.’

‘The Code for Sustainable Homes has been crucial in raising environmental standards in new housing over the past decade but the move to embed energy targets within Building Regulations is right. However, the government must now set out as soon as possible how other crucial elements of the code not related to energy will be retained through planning guidance and local policy.’